skip to main | skip to sidebar

I'm breaking the last two sets of pages up so they aren't as pic-heavy. These last two groups were made last because they took more thought and planning since they aren't standard quiet book pages. 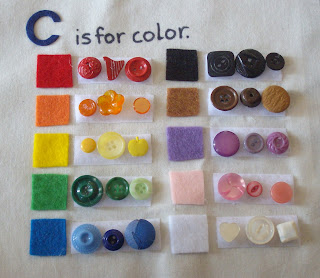 Color Sorting. This page will have strips of velcro along the outside of the page to mix up the colors, as well as the velcro next to each color.  Look at me putting my button collection to good use! :) 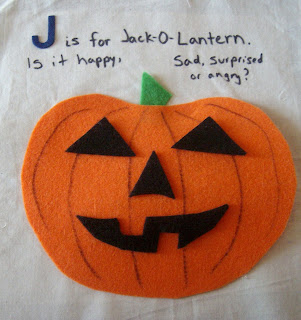 This one seems really easy, but my son's name starts with the letter J, so there was a lot of hemming and hawing about doing a page with pictures of him or something. I eventually decided against it since we plan on having another child at some point. 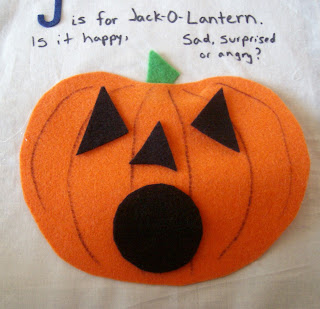 I cut out enough shapes to make a happy, sad, surprised, or angry face. The right side of the pumpkin is left open to serve as a pocket. I did that wherever possible for ease of storage. 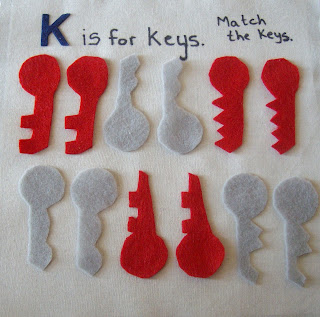 One of each key is glued down to the page, and the other is loose. Since I didn't plan storage into this page I will probably put all the loose keys on a ring or something. I'll give an update on that later. 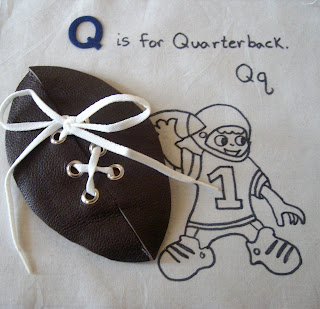 This is a take on the standard tie-a-shoe page. The football idea came from Tricia at Made By Me. Shared with You., and the quarterback image was traced from clipart via Google. This one took a lot of thought as well because I was contemplating including my husband's favorite team and player- Packers and Brett Favre, or maybe an additional lacing card. As you can see, I decided on something generic instead. The football is upcycled from a leather purse, and has a double layer of felt on the back as well as velcro so it can be pulled off and played with.
Linked up to: http://www.soyouthinkyourecrafty.com/

Lyndsey
Hi. I'm Lyndsey, and I'm a working mom, wife, and when I find the time, a crafter. This is my story of trying to live a more simple, thrifty, and joyful life. Welcome!